My time in Wisconsin has continued to be entertaining, and also fairly uneventful, a relief after some of the “interesting” times I’ve been through lately. I’ve been taking this week as a good chance to re-group after Pennsic, rest, work on some projects, and I’ve also been doing some “real work” and am learning some new digital art skills.

As many of you know, I show some of my artwork at science fiction and fantasy conventions. They are a fun place to display (but usually not sell) some of the more interesting and obscure things I create. I also have started doing prints of some of my 2D work, and that’s actually where I actually make a little bit of my money back, selling cards and the occasional larger print. Recently I’ve been inspired to start some new projects, and one of my goals is to become proficient at creating digital paintings and art. I’ve just started in on the learning, and while in Wisconsin I’ve been borrowing my friend Ursula’s Wacom Bamboo tablet to use along with my copy of photoshop. My first totally digital piece is still in progress, but here is a sample of what is on its way: 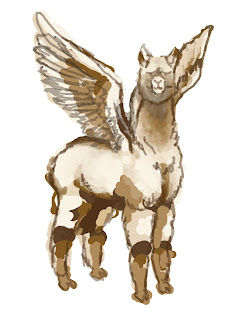 Of course this means I need to get my own tablet before too long, and preferably a Wacom Intuos. And at some point I may pony up for a new copy of photoshop. And a new computer that can handle all of the digital editing. Weeee. But for now… learning!
The other projects I’ve been working on include a fourteenth century fitted dress that I’ve had partially done for a while now. I’m currently trying to complete the arduous task of making and sewing on a gazillion buttons and the button holes to go with them. I have all of the buttons on one sleeve done, and am almost done with the button holes on that side. 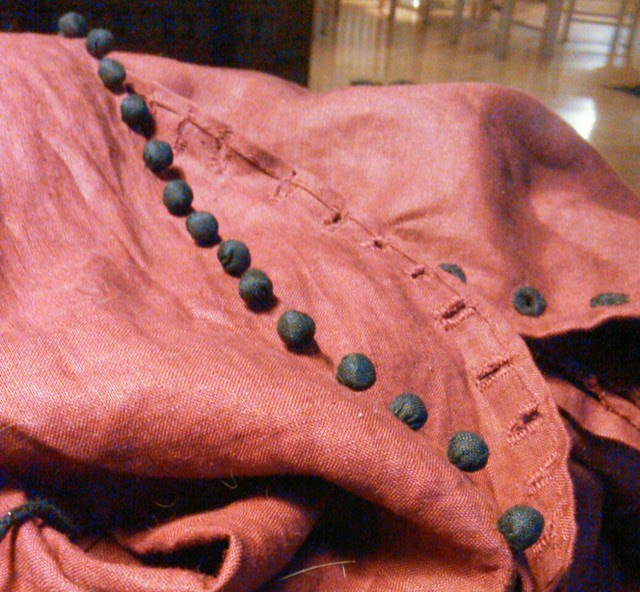 One of my hosts, Brian, helped me with another project, making a sheath for the cute little carving knife I got at Pennsic. This is my first time making a knife sheath, and it’s still drying in shape (hence the wrap around the knife in the picture), but I’m really looking forward to when it’s done and I can play with it! 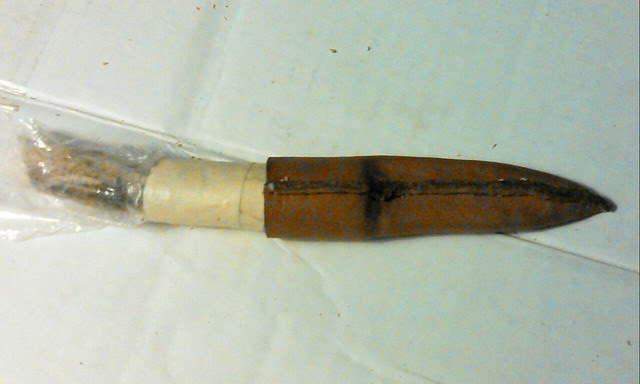 And there was shooting! Brian also took me to his local shooting range where I fired a gun for the first time since I was a teen. It was great! Now I just need some more excuses to go shooting back home. 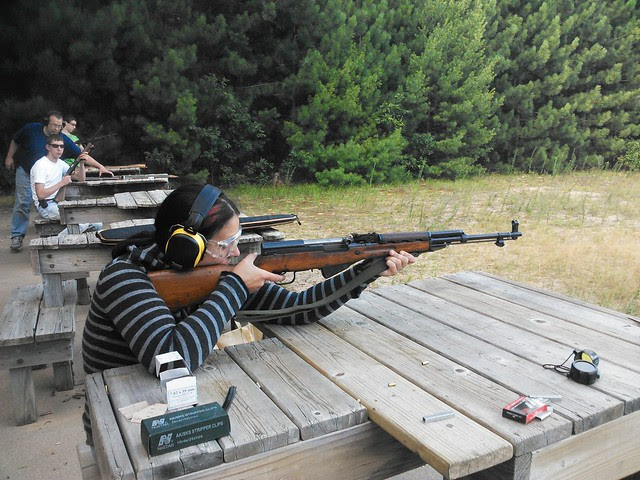 Let’s not forget the other element of relaxation: beer. After making good art, and blowing stuff up, some nice micro-brews are definitely a good way to top off the night. The beer pictured below was quite tasty along with the brownies we made last night. Plus, it is made by Valkyrie brewery, and since Valkyrie is the name of my apprentice, I just couldn't pass it up. 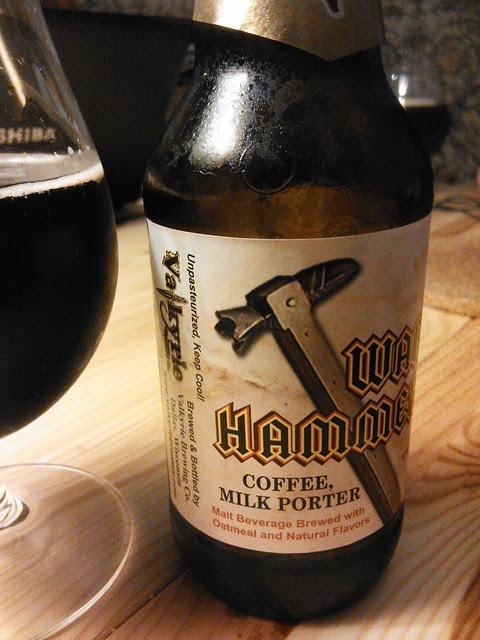 I totally forgot! I also had my first fish fry! This tradition is apparently a staple of the upper mid-west. Everyone goes out on Friday and partakes of fried fish! Since Ursula and Brian had yet to experience this, we did a google search for the best fish fry in Eau Claire, and settled on an option. A deceivingly seedy looking establishment of drink which was already known to serve great burgers, so we had hopes for their fish. Apparently other people share the opinion that this place (the Court-N-House) serves edible food, because when we got there it was standing room only. We got a seat maybe 20 min after we got there (though a waitress took our order right away), and then our fish came. It was pretty frikkin' good! Nice thick chunks, tender and moist inside, crispy on the outside, served with fairly tasty coleslaw and nice crispy waffle fries. We are counting it a win! 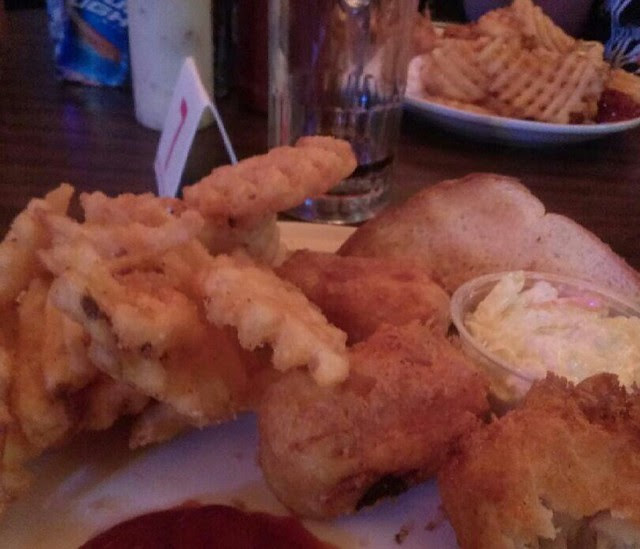 And tonight at dinner we had some more brews from the multi-pack we got from Valkyrie Brewery: 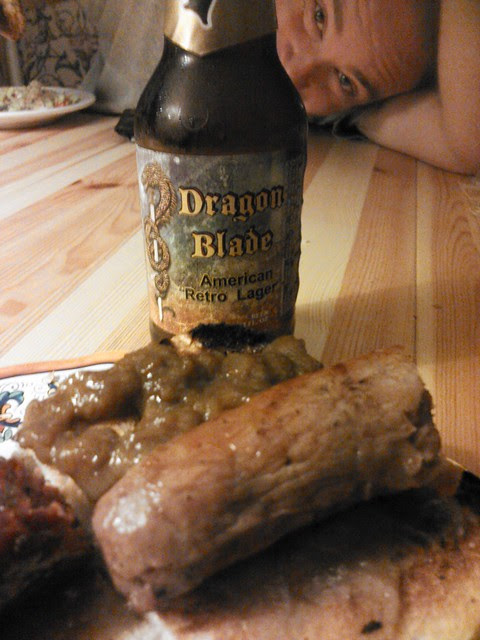 The entertainingly named "Dragon Blade," behind a locally made brat, with Brian photo-bombing in the background. :) 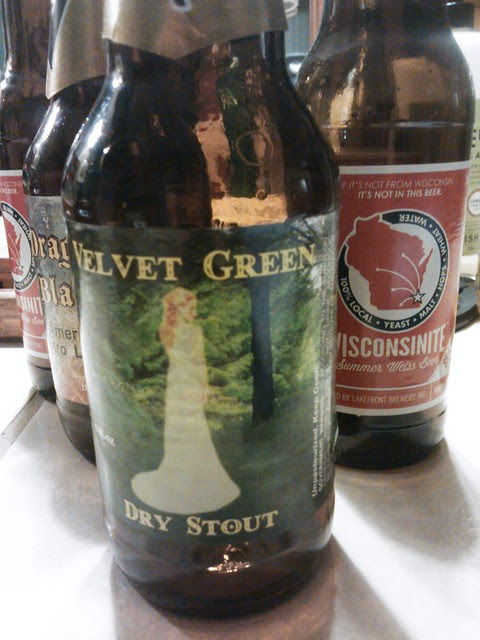