I’ve never felt at all morally ambiguous about the use of vintage furs. And really, until I started doing price-checks on-line recently, I had no idea there was such a debate about it. The interesting thing to me is that no one really seems to be mentioning my reason with being happy about using vintage furs:

I feel that like any other resource we use, once animals have been made into furs we should make full use of them rather than letting them go to waste. 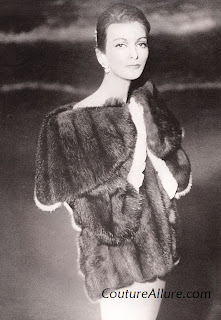 I feel this waste-not want-not principle is particularly true in the case of vintage furs. If we’ve killed animals for the use of their furs, I see it as a far worse offense to then waste their deaths by destroying the furs, hiding them, or otherwise making that resource useless and that death meaningless. Yup, that’s my hippy-dippy side coming out. Deal.

Recently I began bidding on lots of vintage furs on auction sites like ebay, largely so that I could enable my friends by making vintage fur available for crafting (I’m involved with a group that does medieval style events, and also some Victorian-esque groups). New fur is often both expensive, and morally problematic, so I like the idea of making a better alternative available. I got the idea after trying to find some fur at an event for some Viking-style hats I was making and having questions raised about the vendors I was purchasing fur from.

After discovering that I could bid on larger lots of fur as long as I was willing to deal with the issue of then having SO MUCH vintage fur around, I decided I just needed to be an enabler, and since I was already selling my glassware at events, bringing some vintage fur finds along too was a natural progression.

The issue that’s come up since then is people wondering if they can get away with wearing some of the nicer vintage pieces in public. Especially because we live in Portland, Oregon, where we had a furrier closed down because of extreme anti-fur demonstrations. Well… I’ve been wearing rabbit fur scarves here for over ten years and have yet to be painted red, but I also don’t lurk outside of furriers’ windows. And maybe my coming out about being ok with vintage fur will change that. 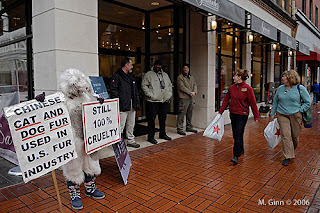 The big argument from PITA against wearing even vintage fur (heck even fake fur) is that if you wear it, people will want to imitate you, and thus buy fur and perpetuate the problem. I would have to argue that re-using vintage fur MORE would help with this because it’s unique looks are different enough from the current trends that it won’t encourage buying new fur off the rack. Making it readily available certainly feels like it’s helping rather than harming – I know I’m buying less new fur, and so are my friends.

I’m not saying you should change your mind and go buy some fur right now, or stop being a vegetarian, or anything like that. But before you automatically judge all fur wearers, think about things a little bit more, and hold back on the drastic vandalism, and consider some issues of respect. And if grandma’s furs are crumpled in a box in the attic, consider at least making sure they get smoothed out and are in a breathable container... because it’s a sad thing to ruin a piece of history. 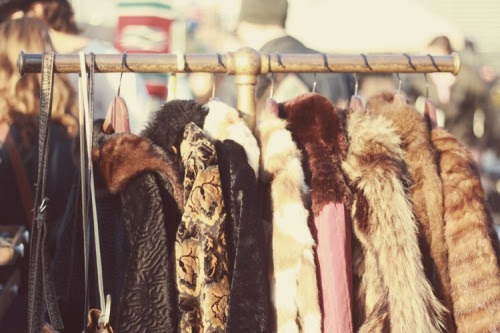 Of course if you want to buy something, I'd be happy to sell you a vintage fur, on my etsy site or at an event. I'm even considering starting to make items like hats using vintage materials such as fur as components. But you can also go trasure hunting for your own, which can be a lot of fun. If you are looking for a good deal, I suggest going someplace like the Goodwill bins, or if you don't mind waiting for a few months, you can always lurk on ebay, waiting for just the right thing, at just the right price. 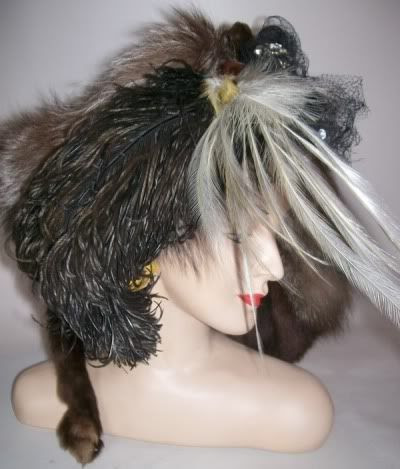 There is a LOT of vintage fur out there, it should really be taken care of and given the respect it deserves, rather than shunned and miss-treated. And if it’s in bad condition, think about re-working it and giving it a new life as something someone will love. If many animals died for that stole, make sure that their little lives aren’t just thrown into a dumpster, please. Treat them with the care you would treat any other precious resource.
Posted by ElfieDoom at 2:51 PM 2 comments: