A Week in Wisconsin

Guess where I am? Ok, I gave it away with the title, but I'm fairly sure that most of you wouldn't think of Wisconsin as a likely spot for Adventure Girl Vandy to visit. So why am I in Wisconsin? A very good reason actually; after Pennsic I drove back to Wisconsin with two of my oldest and best friends, Ursula and Brian, to visit them, at their home. Last year Ursula and Brian purchased a 100+ year old farmhouse, and we've been looking for a good time for me to go out and visit.

My biggest surprise about Wisconsin so far: It's not nearly as boring/bad/nondescript as I imagined the mid-west would be. Of course I've been informed that this is the Upper Mid-West, and thus it is superior to the rest of the mid-west.

So far there are some things I actually really like about Wisconsin. The abundance of great produce and farmer's markets is pretty awesome. I also love that the farmer's market in the town I'm in (Eau Claire), has a permanent market pavilion roof, so the farmers can just pull up and unload rather than have to set up booths. I wish we had more of that sort of thing in Oregon. Also, being able to buy things like inexpensive lamb is a total win! 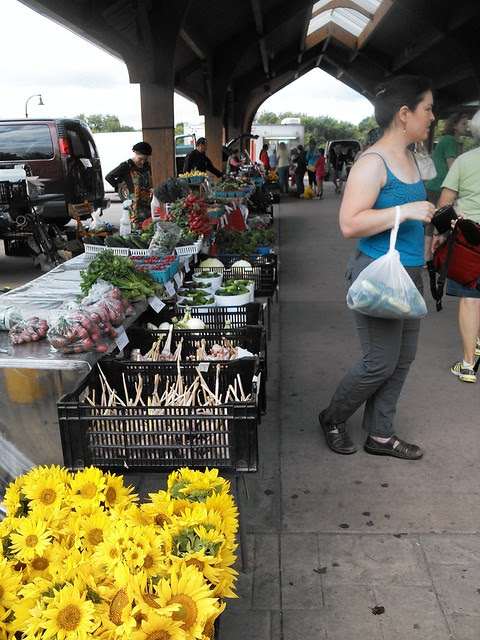 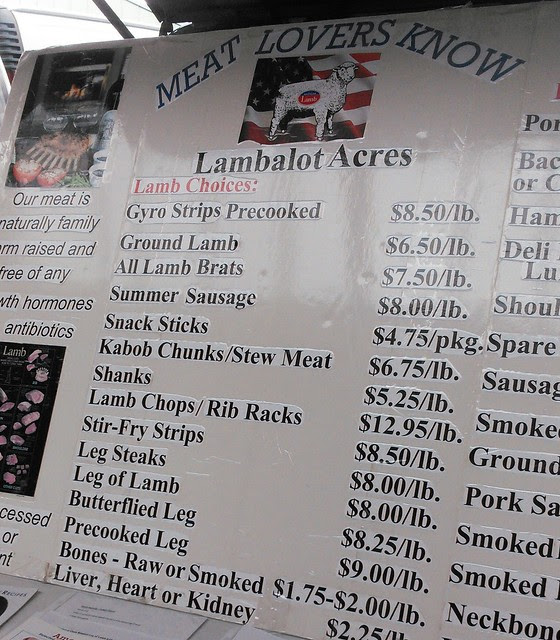 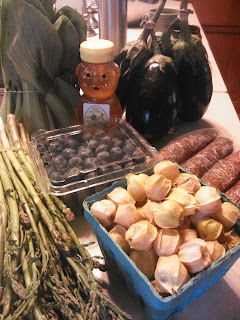 Our spoils from the farmer's market!

Compared to spending a lot of time in California and Arizona, where I've been all to much recently, visiting an area that is green, with low rolling hills, trees, and attractive water-ways, is a huge relief to my eyes. I've always been skeptical of living somewhere not near a coast, or far away from the closest mountain range, but I'm guessing that the proximity of the great lakes would at least lessen the feeling of being trapped that I always assumed I'd have if stuck in the center of the country. My eyes do miss terrain, but I'm going to try to make up for that by hopefully soon by visiting some underground terrain, namely the Crystal Caverns, which are less than an hour from my temporary home.

Another nice thing about this area is the large amount of scandinavian influence. Every town has a scandinavian import shop, and I've been informed that we can get some really good pickled trout, which I am eagerly awaiting tasting. Of course the high population of scandawhovians also means that there is a decidedly different look to a lot of the population. There are a lot of blond, blue-eyed, football player types around here, so I'm sure I stick out quite a bit, but so far people have been quite nice, also a regional trait apparently (though I usually think of courtesy and hospitality as more of a small-town survival skill). I've already tried another regional delicacy, fried cheese curds, sampled some local brews, and am awaiting trying the traditional friday night fish-fry. 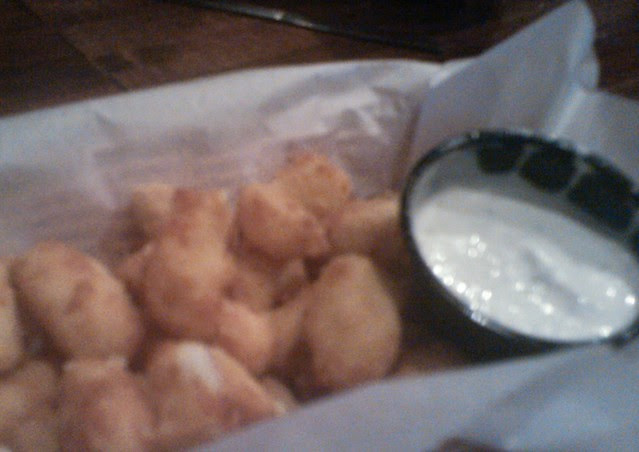 And speaking of cheese curds, I have already been to *TWO* cheese stores! Yay cheese! While driving back from Pennsic we stopped at an amazing cheese store in Madison, called Formagination, for sandwiches. They had about a gazillion kinds of cheese and sausage, and even chocolate! 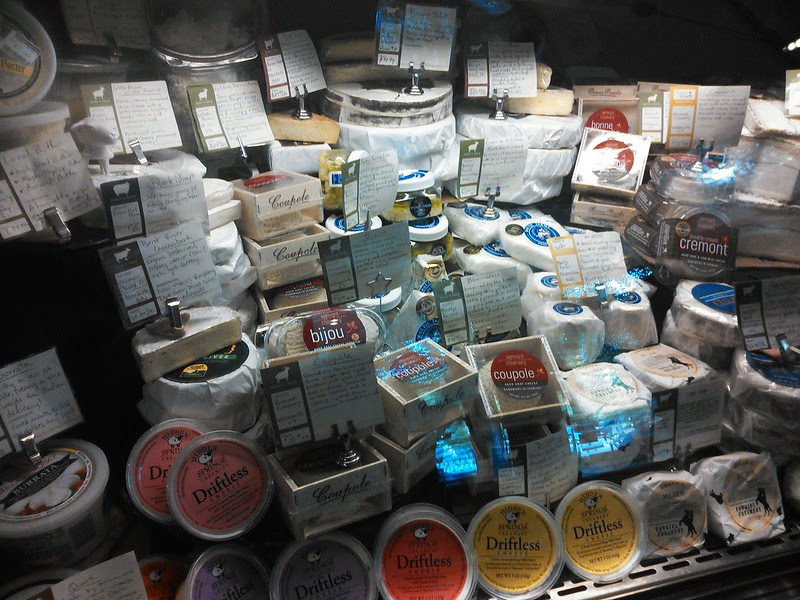 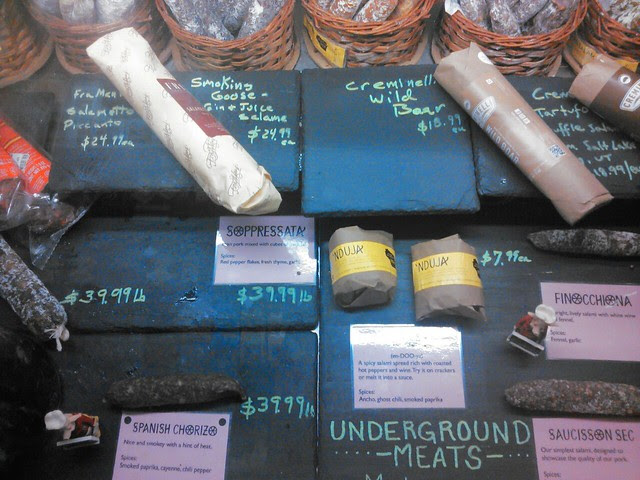 We also visited the little, but packed full, Nelson Cheese Factory Store, in Eau Claire. There we saw a variety of yummy and entertaining things. 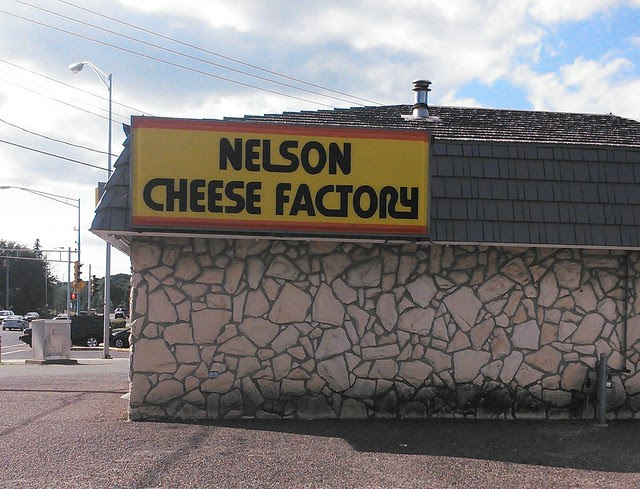 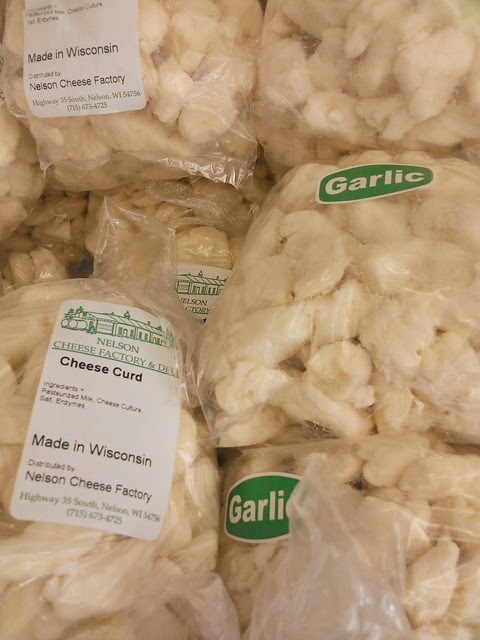 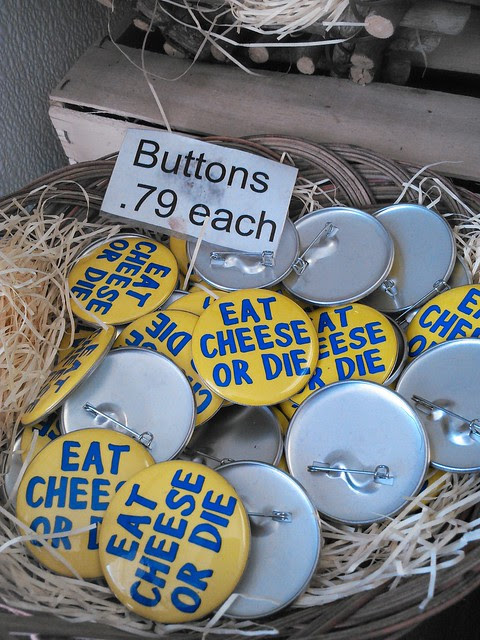 Aside from attending the farmer's market, I've gone rock climbing at the local college rock wall, walked around town a bunch, went to an awesome three-story antique shop where I could have spent a week looking through piles of art books and old auction catalogues (I only bought two!!!), have been to a couple of local pubs for libations, and last night I attended a hwa rang do (a Korean martial art) class. 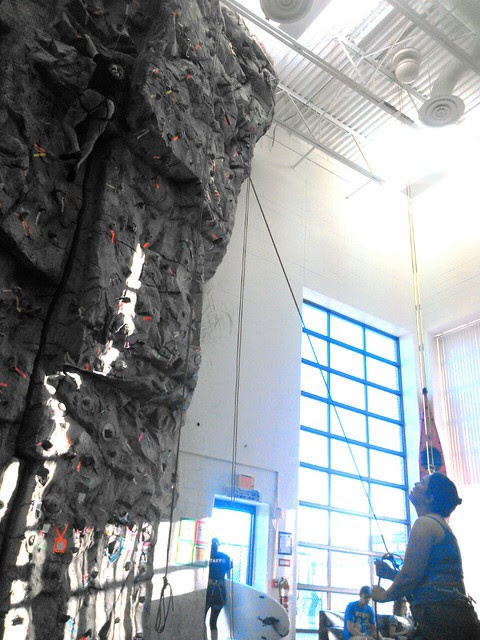 Oh, and also on our way back from Pennsic we stopped at this knitting/spinning/weaving store in the middle of nowhere (sort of near Madison), and it was AMAZING! Rooms full of every kind of fiber and yarn imaginable. 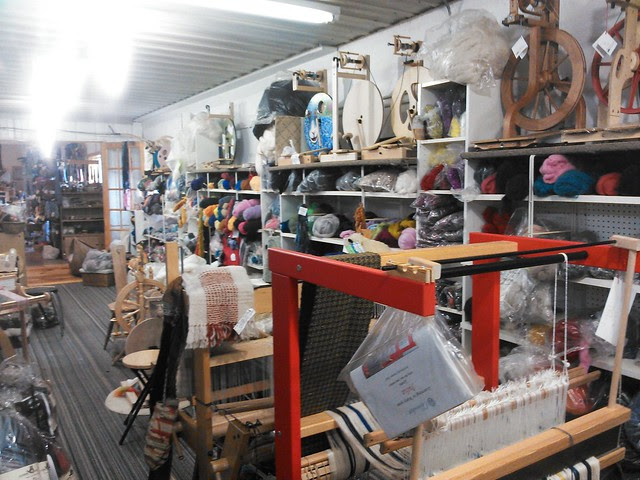 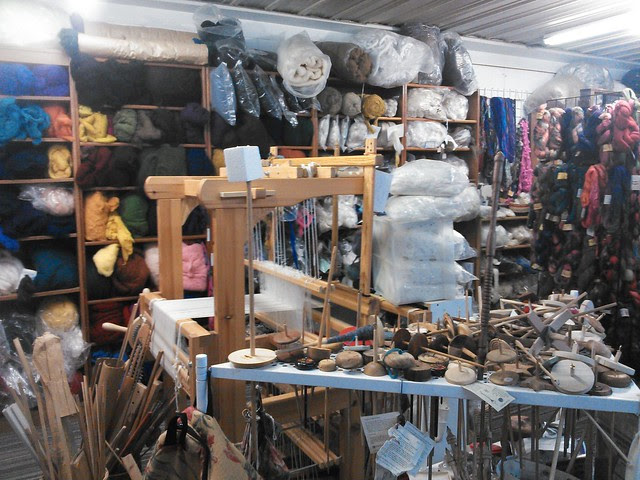 Drewwwwwllllll. Yeah, so much fiber goodness. I managed to restrain myself to gettin 3 oz of cashmere... somehow.

I'll be in Wisconsin until Monday evening, and we have several possible plans about things to do, including going to Crystal Caverns, going shooting, making some more of my coins, and possibly a trip to which ever of the great lakes are closest. And I have decided that I need to come back in the winter and go ice skating and ice fishing!
Posted by ElfieDoom at 9:49 AM