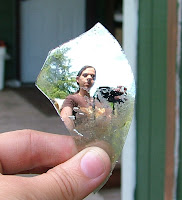 Earlier this year at Estrella (a medieval reenactment war that takes place in Arizona in February) I got an inquiry about making some medieval glass mirrors to be placed in 13-15th century style pocket mirror cases. Like many people, I'd never herd of pre-renaissance glass mirrors, so was intrigued by the possibilities. I was spending the three weeks directly after that at the Corning Museum of Glass in upstate New York, and had access to their amazing research library. I proceeded to spend most of my non-work days closeted in the library, and a couple of surprised librarians helped me track down information on early glass mirrors. 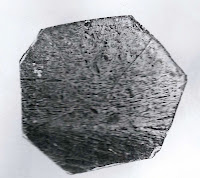 Much to all of our surprise, it turns out that glass mirrors have been in use just about as long as there has been glass blowing. There are Roman references to producing mirrors from blown glass and tin or lead, and numerous small mirrors (such as the one at the left from Birka) and fragments have been found in Viking era graves. 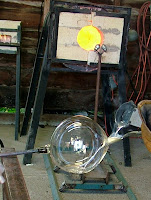 The basic process of making glass mirrors is pretty simple - you have to put a metallic coating on the glass to make it reflective. Before the amalgamation technique was developed (a process developed in the renaissance requiring the use of mercury to mirrorize flat glass) this was done by blowing a large thin glass globe and pouring molten metal (lead or tin) inside of it while it was still hot. The tricky part comes in letting the glass cool down enough to have the lead or tin (which have a much lower melting point) stick to the glass rather than remain a moving liquid puddle without the glass cracking or popping off of the punty. Once the glass has been mirrorized it's broken free of the punty and allowed to cool and crack without annealing. This is why most pre-renaissance mirrors are also quite small, generally between around 2 and 6 cm. 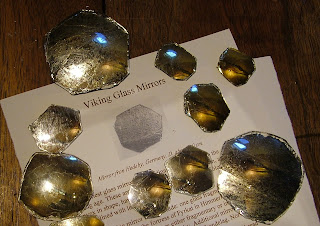 So far in my experimentation I've managed to make several at least partially successful mirrorized globes, and have cut the fragments of these into viking style mirrors. As I do more experiments, I'm planning on refining the process for more consistent results and then also producing mirrors suitable for mounting in later period medieval pocket mirror cases. I'm also interested in mounting some of these as pendants. There is a reference to a mirror 'wrapped in silver wire' for use as a pendant that was found at Birka, and I would love any images or additional information anyone has on this.