Hey everyone, I just got back from Pennsic War, the largest Society for Creative Anachronism event in the world. Pennsic consists of two weeks of camping, in what is usually a pretty hot and muggy environment, but also can be a very rainy at times. This was a good year. While the attendance of the event was down a little, most likely due to it being a week earlier than usually scheduled, it was still a lot of fun! While there were some rain storms, the weather stayed a bit cooler than normal, which was especially nice for fighting. I fought for a couple of the days, practiced my juggling, worked on crafts, ate lots of awesome food, saw old friends, and made new friends. Hard to go wrong with that! Here are a few images from the war:

In the Feed the Ravens booth, where I was working and selling some of my glass.

Practicing club passing with my friend Ethan, in front of our camp, "Camel Lot."

Juggling clubs at the front of the Lac Pride Parade, an annual and very silly event that the lake-dwellers do around the lake at Pennsic. 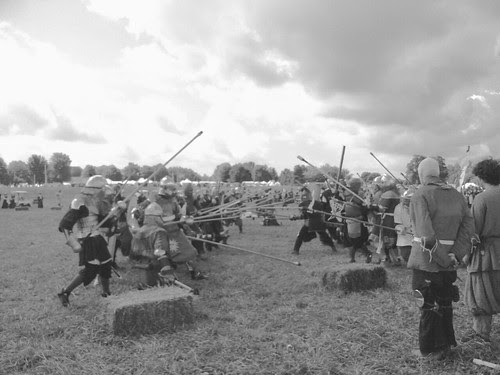 Posted by ElfieDoom at 9:50 AM